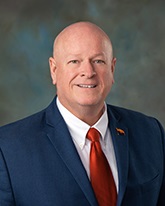 Kevin Thompson has over 25 years of utility and regulatory experience, including serving as a twice-elected Councilman for the City of Mesa. Kevin is a combat veteran of the United States Air Force, serving in Operation Desert Storm. He is a small business owner that focuses on helping clients grow and expand their businesses and bring economic development to Arizona. Kevin was a cofounder of the Mesa Veterans Resource Center, an East Valley resource for veterans that includes help with employment access, resume building, VA healthcare and benefits training, mental health counseling, and more.

Kevin’s commitment to economic development brought in over $8B in capital investment and the creation of over 5,000 jobs to Mesa’s District 6 and the region, making it the fastest growing area in the Southeast Valley. He passionately fought to end human trafficking, working with the City Attorney and police department to establish ordinances to actively shut down those trafficking our most vulnerable. As a Veteran, he chaired the Mayor’s challenge to end veteran homelessness and formed public-private partnerships to provide wraparound services for those that served our country.

In his capacity as a Councilmember, Kevin was directly responsible for setting the utility rates for the City’s utilities (natural gas, electric, and water & sewer) and fighting on behalf of the citizens for just and reasonable rates. He represented the City serving as President of the Arizona Municipal Water User’s Association (AMWUA), a multi-city organization formed to facilitate water resource planning and water policy development at a regional level. During his tenure, he advocated for the Central Arizona Water Conservation District to designate a portion of taxes to be used for federal repayment of the construction cost that built the CAP infrastructure, ensured citizens had a voice on the Governor’s Water Augmentation Innovation & Conservation Council, and supported the Groundwater Withdrawal Fee extension to conserve, augment, and monitor groundwater withdrawal.

Kevin was the Manager, New Business Development for Southwest Gas for over 12 years, responsible for all new business engineering including the sale, design, and installation of billions of dollars of natural gas pipelines for residential, multi-family, retail, and commercial development. During the economic downturn of 2008 when economic development all but ceased nationwide, he transitioned to the government affairs office where he focused on local government relations for 5 years. In this role he worked with the Arizona Department of Emergency and Military Affairs on Emergency Management, Utility Emergency Response, and natural disaster response planning.

Kevin holds a Bachelor of Science in Mechanical Engineering from the University of Nevada, Las Vegas. He is the recipient of multiple awards and recognitions, including the United Food Bank Service Award, recognition as a Champion for the Southeast Business Group, and was awarded the Mesa Veteran Appreciation Award to name a few. Kevin and his wife, Donna, have been married for over 33 years and have two children.