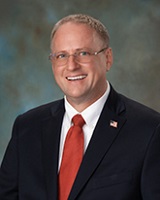 Nick ran a campaign on wanting to bring back regulatory stability, keeping rates low, and keeping our utilities resilient and reliable. This can be accomplished by removing unnecessary mandates and subsidies, modifying rules before forcing policy on utilities (in other words, stop changing the rules in the middle of the game), and putting statewide policy making back into the legislature where it belongs.

Nick spent almost 20 years in the software engineering industry. He then branched out into small business where he and his family started and sold several businesses. Nick's involvement with the commission started when he had a major dispute with a utility. This led to Nick being a community advocate in a multi-year process that was very successful. Following that, he became a Policy Advisor for Commissioner Justin Olson until being elected as a Commissioner himself.

Nick's engineering mindset, technical background, utility and policy work, and business experience bring a rare combination of skills to the commission. Nick understands what it takes to make businesses successful. He understands the dangers of ideology driven decisions and has the ability to see all sides of an issue to make the best decisions.

Nick, his wife and three children live in Pinal County. Nick appreciates the faith the residents of Arizona have placed in him in electing the first ever Commissioner from Pinal County, and looks forward to serving all Arizonans.